Who should sign the Medical Consent form? Patient or Relative 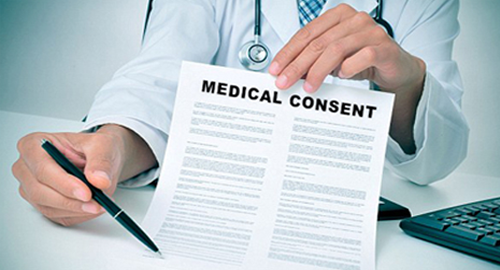 Pre-procedural medical consent has been a sore point for Indian doctors. The uncertainty starts right from ‘when to take an express consent’ to ‘how to take a valid consent’. Lack of standardised consent formats and variable judicial interpretations have added an extra dose of anxiety to the already complex medical practice in India. I will discuss this important issue in this article.

To begin the discussion, we will take-up this case – Suresh Chandra Mytale & Anr Vs United India Insurance Co. Ltd. & Ors. The patient, a 71-year old diabetic lady, was examined by the doctor in the OPD, and subsequently admitted to the hospital for performing a colonoscopy.

The physician sought consent for performing colonoscopy-without-sedation from the patient’s kin. During the colonoscopy, the patient developed difficulty in breathing, palpitations and altered sensorium.

The patient was therefore shifted to Cardiac Care Unit, where she was found unconscious, gasping and pulseless, thus necessitating ventilator support. Subsequently she developed cardiac arrest and succumbed to the same despite resuscitation attempts.

The patient’s kin filed a complaint in District Consumer Forum, which held the doctor and the hospital guilty of negligence and ordered them to pay a compensation of Rs.5L with 9% interest.

The NCDRC observed that there was no evidence or expert opinion placed in front of the Commission by the complainant for substantiating the claim that colonoscopy was not indicated, or that colonoscopy should have been performed only under sedation.

The Commission also observed that due precautions like cardiac monitoring were followed during the colonoscopy and hence it could not be said that there was deficiency in that part of the service rendered.

However, the Commission stated that it was evident that the consent for colonoscopy was obtained from the patient’s kin and not from the patient herself, though she was competent to do so. The Commission also stated that usually those patients who want to communicate with the endoscopist during the procedure or those who are not accompanied by an escort prefer colonoscopy without sedation.

Since in this case the patient was accompanied by relatives, it is likely that the patient would have chosen colonoscopy with sedation if the doctor had given her that option. Thus, holding the consent as invalid, the Commission judged the doctor and the hospital grossly negligent and ordered them to pay the said compensation.

To understand the concept of a legally valid consent, we need to first understand why consent is necessary in the first place. Non-consensual interference with the body of a person amounts to ‘assault’ or ‘battery’ under Indian Penal Code (IPC) or Law of Torts, as the case may be. Section 88 of IPC gives protection to Indian doctors for any act done in good faith with the consent of the patient for his benefit, provided that the act is not done with an intention to cause death.

As per Indian legal definition, nothing is said to be done in good faith if it is done without due care and attention. It is important to note that moral elements like good motive & honesty are conspicuous by their absence in this definition.

Thus, establishing ‘good faith’ needs objective evidence. A valid consent is an important part of this evidence. Clause 7.16 of MCI Ethics Code Regulations, 2002 mandates a registered medical practitioner to take consent of the patient before performing an operation.

Practically speaking, for anything beyond ordinary examination & treatment (for which ‘implied consent’ is presumed), an ‘express consent’ should be sought from the patient, lest the physician be vulnerable to allegation of a tort or crime, especially if something goes wrong.

Disclaimer - The content of this article may be viewed only as a general advisory and not as a substitute for qualified legal opinion. Reader discretion is therefore recommended. The information and views expressed in this article are those of the author and do not necessarily reflect the opinion of 20Med.com.